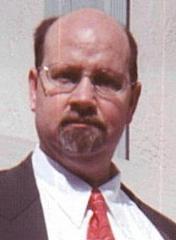 Short Version: I am “Opa” to 5 grandchildren & 4 adult children.

am SEO’d #1 across the board on Google, Yahoo & Bing for the keyword “German Genealogist.”

Since 1979 (while yet a BYU undergrad), for clients, patrons, family members, friends & acquaintances & at least one enemy, I have found:

* Successfully traveled 7 times behind the former Iron Curtain to East Germany for clients’ German Genealogy research! This was back when it was no fun, controlled by a repressive regime of Socialists-Communists.

* Got strip-searched at Checkpoint Charlie in the former East Berlin.

* Researched in East Berlin with my eldest daughter to seriously crack a client’s case wide open.

In the 1st Quarter 2011, I have already set new German Genealogy research milestones to surpass milestones set in 2010!

* Total number of villages researched for just ONE client.

* SMALLEST # of clients! (This is good news! This is what a genealogist wants.) And, therefore,

* The average & total amounts of time researching for just ONE client!

58+ endearing endorsements on Linkedin.com (no, not connections; but rather: commendations, gratitude, kudos, raves, wow letters, etc.)–& that’s just since July 2008–& that’s just from folks who happen to be on Linkedin! Just in case this number does not seem very large, consider how many do you & everyone you know have?

Offline, I have hundreds from folks who were never online! 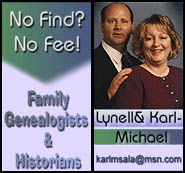 “Lynell & Karl! Quick! Please help me find my ancestors–before I become one!” –a young client
“Expensive? No, Ma’am. Expensive is when you spend 30 years and much expense just TRYING to find what we often DO find in ONE DAY!” –Karl Sala

On your initial retainer for online research, take a 50% DISCOUNT off prices shown below (i.e., get twice as much)!
Can’t find specific data, documents or images yourself?
Hire us @ $50/hr ($500 – $50,000 retainer requested).
No mun? Offer us or sell something you don’t need! We also take pre-approved barter, cash, checks, trade, etc.
This email and any attachments thereto JUST MIGHT contain crucial, important, interesting & USEFUL, publicly available, privileged & special data, documents & images for the conglomerate use of ANYONE who can intercept them. Any review, copying, or distribution of this email (or any attachments thereto) by others is strictly ENCOURAGED! If you are not the intended recipient, please be grateful & SPREAD THE NEWS as far & wide as you can! CONTACT the sender immediately and permanently SAVE the original and any copies of this email and any attachments thereto.

More Germany Genealogy cases being cracked! I have earned your business. Hire Lynell & me today.

Almost a decade ago, the STOCKUM/STUCKUM professional German Genealogy research case was cracked!