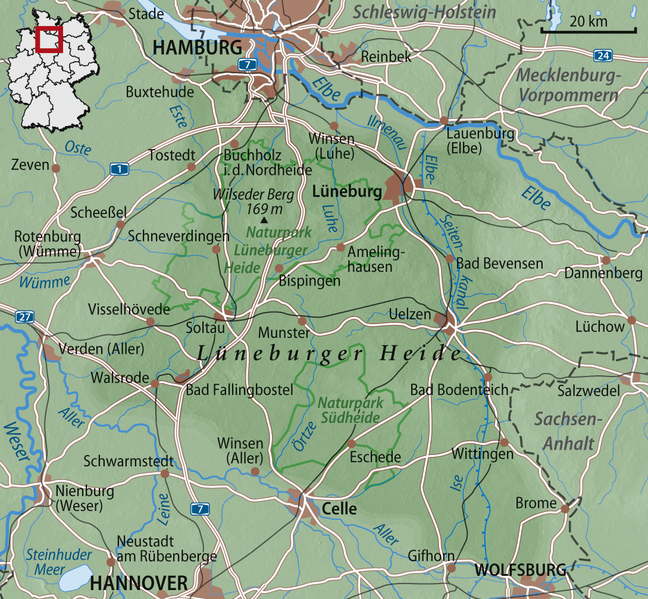 http://en.wikipedia.org/wiki/File:Karte_Lueneburger_Heide.png
While Lüneburg is a city, it is also the name of an area. Someone claiming that they stem from Lüneburg might mean the actual city itself or any town or village “auf der Lüneburger Heide.”
Lüneburger Heide (or Heath, in English)

http://www.britannica.com/EBchecked/topic/351445/Luneburg
Lüneburg, city, Lower Saxony Land (state), north-central Germany. It lies on the Ilmenau River at the northeastern edge of the Lüneburg Heath (Lüneburger Heide), 30 miles (50 km) south of Hamburg. Known as Luniburc in ad 956, it expanded in the 12th century under Henry the Lion, duke of Saxony. It was chartered in 1247 and was the residence of the dukes of Brunswick-Lüneburg until 1371. A powerful member of the Hanseatic League, Lüneburg was incorporated into Hanover in 1705 and became part of Prussia in 1866.
Meyers Gazetteer says:
3 Evangelical Churches
1 Catholic
1 Jewish Synagogue
Below, are the Family History Library Catalog entries of available records for Lüneburg you can order into a Family History Center near you. We’ve only expanded, for now, the available church records. Each one of the entries represents its own link at the website:
CLICK ON THIS LINK TO ENABLE THE HYPERLINKS SHOWN BELOWhttps://www.familysearch.org/search/search/library_catalog#searchType=catalog&filtered=true&fed=false&collectionId=&catSearchType=place&searchCriteria=&placeName=Germany,+Preu%C3%9Fen,+Hannover,+L%C3%BCneburg&author_givenName=&author_surname=&uri=http%3A//catalog-search-api%3A8080/www-catalogapi-webservice/search%3Fquery%3Dsubject_id%3A373407%26count%3D50&subjectId=373407
Germany, Preußen, Hannover, Lüneburg – Archives and libraries – Inventories, registers, catalogs (2)
Germany, Preußen, Hannover, Lüneburg – Census (1)
Germany, Preußen, Hannover, Lüneburg – Church history – Sources (3)
Germany, Preußen, Hannover, Lüneburg – Church history (2)

THIS IS THE BEST POSSIBILITY FOR YOU IN THREE CHURCHES!
Germany, Preußen, Hannover, Lüneburg – Church records (3)Kirchenbuch-Index, 1560-1800