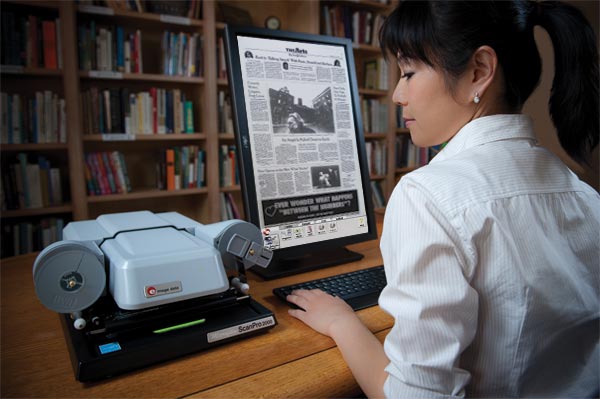 Using E-image Data Corporation’s ScanPro 2000 microfilm scanner is where & how Lynell & I, Karl-Michael Sala of GermanGenealogist.com work near-miracles for clients each day at the Mesa, Arizona Regional Family History Center. An image is seen on the screen, but on that same screen is where the software displays the image controls!

The equipment of choice worldwide

The ScanPro 2000 is the micrographic equipment of choice in the world’s most prestigious libraries and corporations. Its cutting-edge software offers a wide variety of viewing and editing functions while remaining easy to use.

SEE WHAT CUSTOMERS ARE SAYING… “Best microfilm equipment we’ve ever had. The ScanPro is easy to use and provides powerful features for working with all microfilm types quickly and efficiently.”
-Sandra Garstang, Cal Tech…

I have connections in Salt Lake City to get us copies of books that are not orderable into a FHC. Send me your requests & we’ll get those going. Entire book? Certain pages only? Title Page, Table of Contents & Index, with pertinent ancestral family entries? Hard copies, CD, images burned & uploaded to Box.net?

Yes, there are allegedly a “few” microfilm copies, but I don’t want to compete with you when ordering the microfilms. So, you order them into your best FHC. We’ll talk more about that in a minute.

Yes, you’ll need to have your Russian linguist decide which films of the few I sent would be the births or deaths (or are they all mixed on one film). Then just order those from & only into a FHC that has a ScanPro2000 device (image shown herein). Ask fervently about which FHC in your area has 1 or 2 (Mesa has 2, thank goodness). With it, we have performed numerous near-miraculous adjustments of horrible microfilm images. If necessary, it is well worth several extra miles of driving.

We/you can lighten just the dark parts (a little easier) of an image &/or darken just the light parts (a bit trickier) of an image. You can scan them small, take ’em home & still be able to massively enlarge, crop & edit the images. There is usually someone at a Regional Family History Center to coach you. If not, you can arrange to have me be available between certain hours on (a) certain day(s) on the phone to tell you where to click, using right or left click, etc. Prior to calling me, please exhaust first their services.

The more the staff at a FHC & I can teach you to fish, the more you will be able to do on your own & preserve capital for necessary research functions. But, I will shore up the flank.

“Lynell & Karl! Quick! Please help me find my ancestors–before I become one!” –a young client
“Expensive? No, Ma’am. Expensive is when you spend 30 years and much expense just TRYING to find what we often DO find in ONE DAY!” –Karl Sala

On your initial retainer for online or microfilm research, take a 50% DISCOUNT off prices shown below (i.e., get twice as much)!
Can’t find specific data, documents or images yourself?
Hire us @ $50/hr ($500 – $50,000 retainer requested).
No mun? Offer us or sell something you don’t need! We also take pre-approved barter, cash, checks, trade, etc.

Got ancestry, genealogy & family history in East Prussia (Ostpreussen), the province? With gratitude to MyHeritage.com, enjoy a Ken Burns-style slideshow of some crucial documents found for Schwellnus (Szwelnus) ancestry in Luttkomanscheit, a village within the Evangelical parish of Schakuhnen!